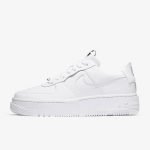 Originally launched in 1982 as the first basketball shoe with Nike Air technology on the market or court, the name of the new premium silhouette already suggested great things. For example, inspiration was drawn from the President of the United States himself and the new basketball sneaker was named “Air Force 1”, based on the presidential aircraft. While the cult sneaker was initially large as a practical high-top shoe on the court and later celebrated as the hip low-top version in the hip-hop scene, the classic AF1 silhouette has since served as the basis for numerous artistic designs and subtle contemporary updates and strong collaborations. However, the typical AF1 DNA, which we owe to its designer Bruce Kilgore, was never lost. Thanks to its timeless versatility, the unique Air Force silhouette gradually blossomed into the undisputed standard in the global streetwear scene – a real “icon” that has more than earned its title.

With the »Pixel« version, the popular All-Time Classic now has a modern design update! The clearly defined white upper of the Air Force 1 is supported by a “pixelated” outer and midsole – we think it’s a really cool detail! On top of that, the heel logo and the tongue tag of the sneaker have been given a clean Nike graphic in a 3D look, which we have never seen before!

No products in the cart.

Continue Shopping
We use cookies on our website to give you the most relevant experience by remembering your preferences and repeat visits. By clicking “Accept”, you consent to the use of ALL the cookies.
Do not sell my personal information.
Cookie settingsACCEPT
Manage consent

This website uses cookies to improve your experience while you navigate through the website. Out of these, the cookies that are categorized as necessary are stored on your browser as they are essential for the working of basic functionalities of the website. We also use third-party cookies that help us analyze and understand how you use this website. These cookies will be stored in your browser only with your consent. You also have the option to opt-out of these cookies. But opting out of some of these cookies may affect your browsing experience.
Necessary Always Enabled
Necessary cookies are absolutely essential for the website to function properly. This category only includes cookies that ensures basic functionalities and security features of the website. These cookies do not store any personal information.
Non-necessary
Any cookies that may not be particularly necessary for the website to function and is used specifically to collect user personal data via analytics, ads, other embedded contents are termed as non-necessary cookies. It is mandatory to procure user consent prior to running these cookies on your website.
SAVE & ACCEPT